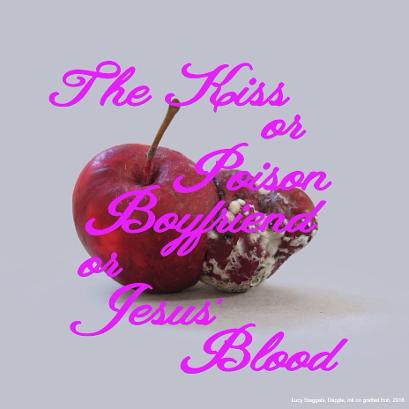 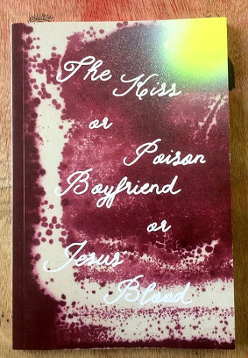 The Kiss or Poison Boyfriend or Jesus’ Blood

Printmaking has long been lionized as a quintessentially democratic art form. Devoid of a unique and uniquely prized object, prints can be produced in multiples and disseminated broadly and at relatively low costs. This wholesome and rose-tinted celebration of print’s virtue is naïve and ignorant. Not only does it presume a sufficiently (but not too) affluent audience to domestically purchase and treasure these inked, stained or inscribed papers. This attitude also, and fundamentally, fails to grasp print’s insidious, corrupting and anarchic technology. It is the scab of this insidiousness that this exhibition seeks to pick at. And it does so by exploding the traditional forms and distribution strategies of printmaking as metaphor (a symbolic ‘other’), and as synecdoche (complicit and internalized). A plate, or a block, or a stone is inked and wiped so that an oily pigmented grease remains, fresh and wet. That potent surface – cumbersome and smelling of old machines – is brought slowly into contact with a pristine substrate; a snow-white paper, or a raw canvas, and then pressure is applied. Often very great pressure. The spent plate, or block, is then removed leaving the receiving substrate scarred with an image of this impact. But, what about that exchange? What about that moment when the coloured mud infected the immaculate page? What is that touch? And, what is that transaction?

Untethered to intaglio print technologies, and unprepared to simply replace them with our own digital surrogates, this exhibition is instead interested in the intimacy and corrupting potential of touch. Touch is an event. It is the coming together of two bodies, and as that event occurs, a causality is set in train – and the toucher cannot get it back. The half-brick has left the hand and is now hurtling toward the window. The rolled-up shirt cuff has fallen unchecked into the bleach bucket. The Kiss or Poison Boyfriend or Jesus’ Blood snares the moment of influence as a painter thumbs another artist’s monograph in the studio. It freezes and makes conscious the pass of an index finger across the screen of an iPhone, or a Sharpie across a fashion magazine page. It captures the bloom of a saturated dye, staining by capillary action, an unprimed cloth. It enacts the vulnerability of a painting’s constituent parts held in place by the gunky glue of its own paint alone. It traces the golden repair of Kintsugi pottery. It checks the connection of an embrace and mourns the pathos of the unarousable. It celebrates molding and bleaching as creative touches and it forges new forms from the fall of light and the grafting of two apples.

The Kiss or Poison Boyfriend or Jesus’ Blood is curated by Dan Howard-Birt at the invitation of Intercession Gallery whose remit is to explore print in its broadest sense. It will be shown at Intercession Gallery, Northampton, Project 78, St Leonards-on-Sea and Kingsgate Workshop London

Also showing at Intercession Gallery will be InCase.3 'After the Party' with Dan Howard-Birt, Francesca Anfossi and Daniel Spoerri

The Kiss or Poison Boyfriend of Jesus' Blood at Intercession Gallery: 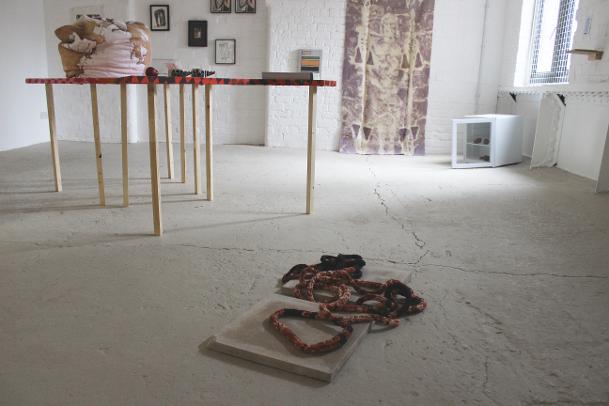 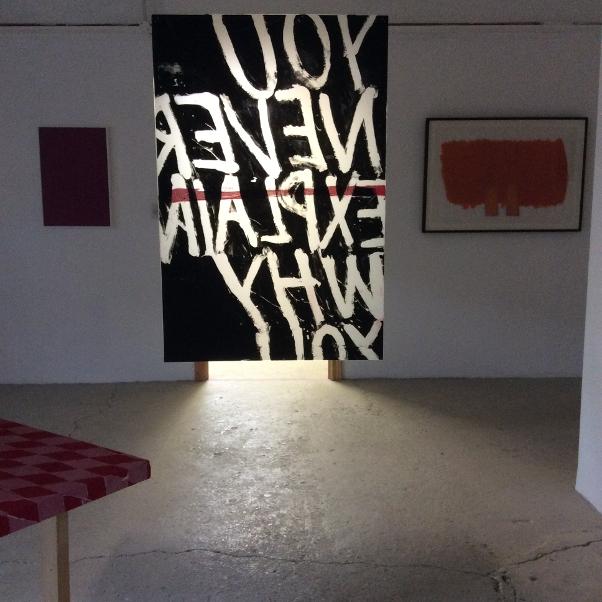 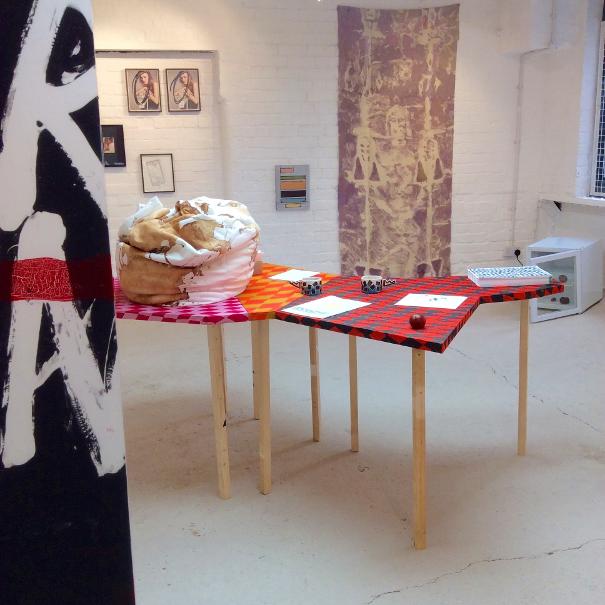 Above: View into main gallery framed left with Alice Hartley's hanging monoprint You Never Explain Why 2017 (individual works detailed in gallery section below) 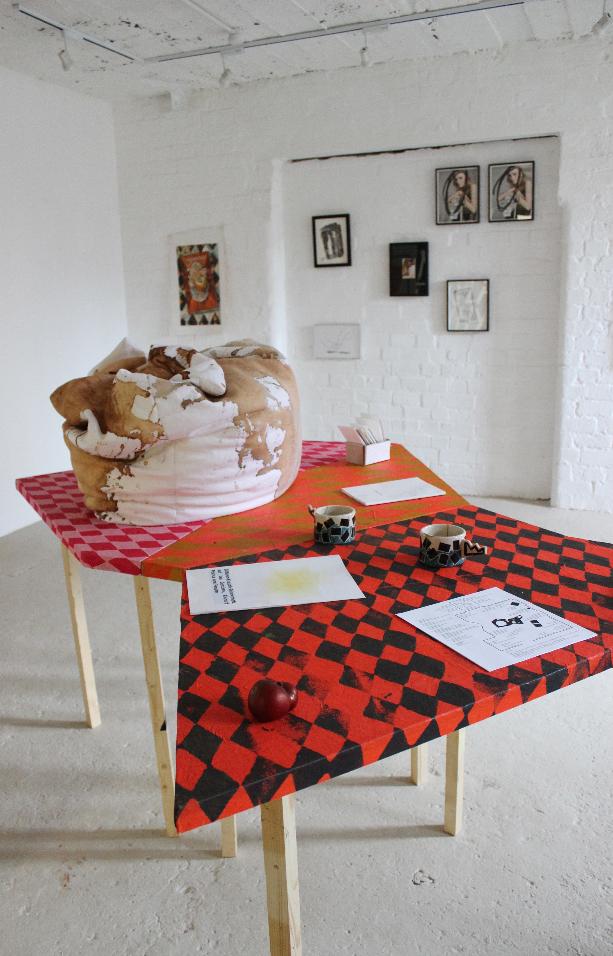 Above: Gallery view of tabletop. (individual works detailed in gallery section below) 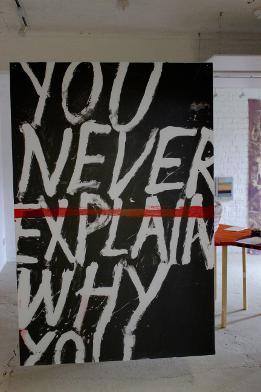 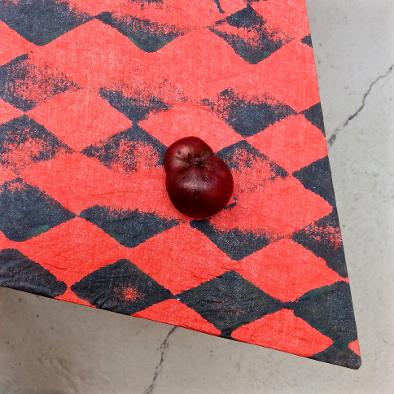 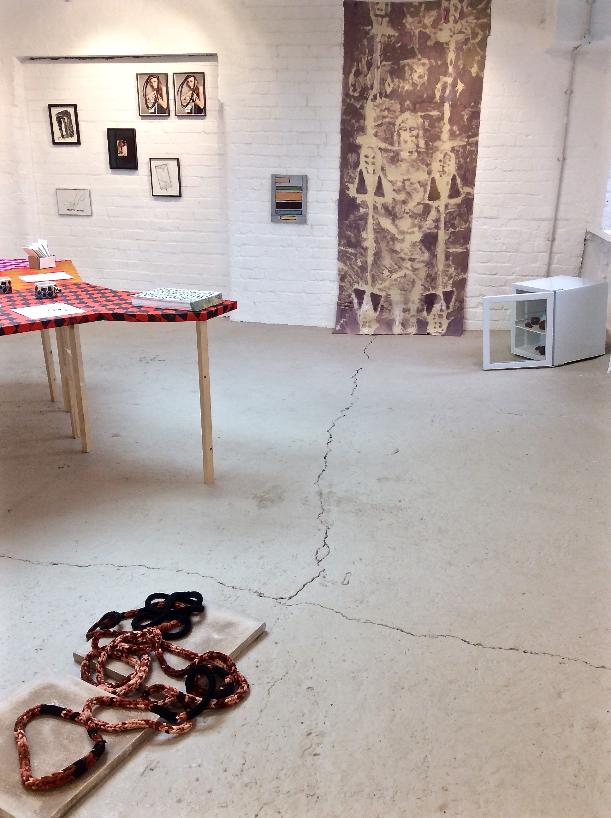 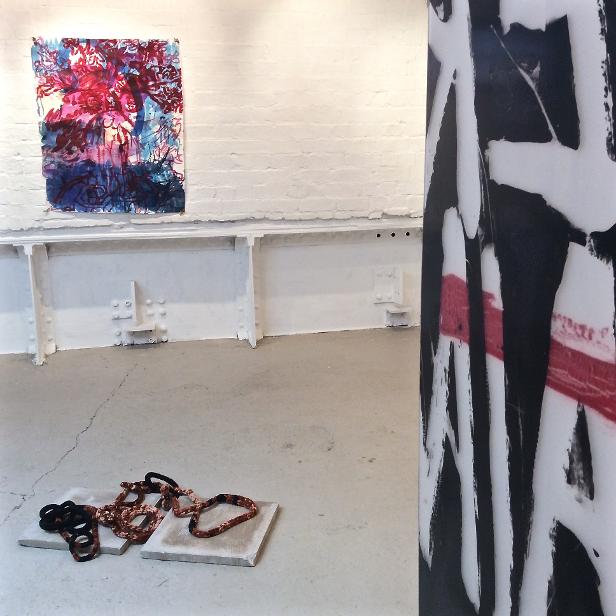 Alaena Turner (born 1984, UK) graduated in 2008 with an MA in Fine Art from the Slade School of Fine Arts and previously studied at Chelsea College of Art and Design. In 2016 Alaena curated the exhibition Ingredients, Method, Serving Suggestion at A.P.T. Gallery, London after receiving the A.P.T. Curatorial Fellowship 2016. Recent exhibitions include; AutoAgents, Bluecoat Gallery, Liverpool, (2016-2017); Seed, Passatge Studio at SWAB Art Fair, Barcelona (2016); Slow, Thick Fingers, Kingsgate Project Space (2016) (curator); and At the Point of Gesture, Wimbledon Space, London (2015). In 2014 Alaena ran a series of interdisciplinary research workshops called Dinner with Picasso, based at UCL, and funded by the Institute of Making.

Hannah Lees graduated in 2011 with a Postgraduate Diploma in Fine Art from Chelsea College of Art, London, and previously studied at UCCA, Canterbury (2006) and UWE, Bristol (2004). Recent solo exhibitions include; The Turning of Existence into its Opposite, Kingsgate Project Space, London (2017); Turner Contemporary & the British Museum Commission: Hannah Lees, Turner Contemporary, Margate, UK (2016); The Oldest Thing You Can Hold In Your Hand, Workbench, Milan (2016), and Floated On Foam [] Flew With Birds, Galerie Tatjana Pieters, Ghent (2016). Hannah has exhibited in numerous group shows, most recently in The Sleeping Procession, CASS Sculpture Foundation, Goodwood, UK (2017), On Cold Spring Lane, Assembly Point, London (2017), To Hive Mind, The Koppel Project Hive, London (2017), and Is this living? The Approach, London, UK (2016).

Christopher Owen graduated from St Martins College of Art in 1998. He exhibits infrequently. Exhibitions include We’ve Plumbed This Whole Neighbourhood, LIDO Projects, St Leonards-On-Sea (2011). How Men Are, Sartorial, London (2007) and Modern Love in Dusseldorf and London, hobbypopMUSEUM and VTO (2001). In 2017 he curated the exhibition The Man with Night Sweats at Kingsgate Project Space, London.

Lucy Steggals is a collaborative visual artist who develops projects directly with people, and explores site and situation specific work. Most recently, Lucy has been working on a project Florulary, as part of her Artist in Residence at Papworth Hospital, led by Wysing Arts Centre. In 2016 Lucy developed new work with Kettle’s Yard, working collaboratively with the surrounding communities, local area and the archive, culminating in a display at Arbury Community Centre. Lucy collaborates with The Saturday Museum, creating events such as Super Cala, BSMT, London (2016) and Entrances and Exits, Leipzig, Germany (2016). Lucy is part of Artist Cabinet, a collection of six artists working on Strandlines, based at the Centre for Life-Writing Research at King’s College London. In 2016 she launched Varosi (with George Moustakas) a space in North London for events to evolve. Lucy’s public projects include; Saturday Socials, Cubitt; Blank Canvas, Turner Contemporary; Creative Connections, National Portrait Gallery; and Play is Free, Gasworks, London. In 2013 Lucy received the Triangle Fellowship for Insakartists Trust, Zambia.

Corin Sworn (born 1976) graduated with an MFA from Glasgow School of Fine Art in 2009 after having previously studied Fine Art at Emily Carr Institute of Art & Design, Vancouver and Psychology at the University of British Columbia, Vancouver, Canada. Corin was awarded the ARC Leeds Fellowship in 2016 and she was the winner of the Max Mara Prize for Women in 2013, exhibiting a large scale installation Silent Sticks at the Whitechapel Gallery, London in 2015. Recent exhibitions include; The Time of the Foxes, Galeria Arsenał, Białystok, Poland (2016); Corin Sworn, Inverleith House, Edinburgh (2014); 19th Biennale of Sydney (2014), The Rag Papers, Chisenhale Gallery, London (2013); and Art Now: Corin Sworn at Tate Britain (2011). Corin’s film The Foxes (2012) was exhibited at the 55th Venice Biennale in the Scottish Pavilion. In 2012 Sworn’s work was featured in Tomorrow Never Knows at the Jerwood Visual Arts, London, the Glasgow International Festival of Visual Art, and in 21 Revolutions: Two Decades of Changing Minds, Glasgow Women’s Library at Intermedia Gallery. Her work has been collected by the Whitney Museum and the National Gallery of Canada.

Dan Howard-Birt graduated with an MA in Painting from the RCA in 2002, and previously studied at Goldsmiths College, London. Recent exhibitions include; LLE at Bay Art, Cardiff; The Good The Bad and the Ugly: 22 Painters, Charlie Smith, London (2016); Ingredients, Method, Serving Suggestion, A.P.T. Gallery, London (2016); and Coffee and Peaches, LIDO at Electric Studios Project Space, St Leonards-on-Sea. Since 2015 Dan has been the Director of Kingsgate Workshops, London, and he is also the ongoing co-director of LIDO Projects. Recent curated exhibitions include Uncommon Chemistry, Observer Bld, Hastings (2016); Natural Staking, Standpoint, London (2015) and I Cheer a Dead Man’s Sweetheart, De La Warr Pavilion, Bexhill-On-Sea (2014).

Richard Smith (1931 –2016) studied at the Royal College of Art from 1954 - 1957. Richard represented Britain in the Venice Biennale in 1970, and he was awarded the Grand Prize at the 9th São Paulo Biennial in 1967. In 1975 there was a retrospective of his work at the Tate Gallery. Recent exhibitions include Caro, Denny, Smith, Vaux, Bernard Jacobson Gallery (2017); Colour, Shape, Surface, Flowers, New York (2017); and Richard Smith – Kite Paintings, Flowers, New York (2015). His work is held in public collections across Britain and the United States, including The British Museum, London; Metropolitan Museum of Art, New York; The Museum of Modern Art, New York; Tate, London; Victoria and Albert Museum, London; The Whitney, New York; and the Hirshhorn Museum and Sculpture Garden, Washington, DC. Writers