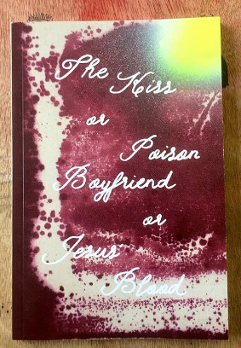 The Kiss or Poison Boyfriend or Jesus' Blood

with some notes on touch by

This publication was launched at the Kingsgate incarnation of The Kiss or Poison Boyfriend or Jesus' Blood exhibition in January 2018.

Copies of the publication can be bought here: Kingsgate Shop

Alaena Turner (see other bio too)

Alaena Turner (born 1984) is currently completing a pHd at University of Leeds, where she received the Arts and Humanities Research Council WRoCAH Studentship in 2015. Alaena graduated in 2008 with an MA in Fine Art from the Slade School of Fine Art, after having previously studied at Chelsea College of Fine Arts (2006). In 2016 Alaena was awarded the A.P.T. Curatorial Fellowship, culminating in an exhibition Ingredients, Method, Serving Suggestion. Alaena was an Honorary Research Associate for the Materials Research Project at the Slade School of Fine Art (2013-2014). Alaena’s published work includes her essay Invisible Seams, in The Suit, Alex Farrar, 7.45 books, Amsterdam (2014); Tilsandede, limited edition booklet of texts and original prints to accompany Tilsandede exhibition (2010) and Paint to Print, limited edition book of prints, Slade School of Fine Art (2008).

Neil Annett graduated with a BA in Fine Art and Art History (1997) and an MPhil in Visual Culture (2001) from Goldsmiths. He is currently studying for an MRes in Philosophy at UEA. Neil has taken part in exhibitions including April is the cruellest month, breeding, LIDO, St Leonards-on-sea (2011) and he is the author of Flour and Water, a website about the art and science of making bread.